The Magic and Mystery of the Black Madonna

When I am visiting a new place, whether locally or overseas, I love it when I come across something unexpected or perhaps hidden away from the usual tourist. I also like it when the past and present suddenly mesh, or cultures intermingle unexpectedly and I get an insight into some previously unknown connection between places and people. So I was delighted when I came across such a find while pootling about in the tourist nooks of Tamborine Mountain.

Helpful Signs in the Marian Valley 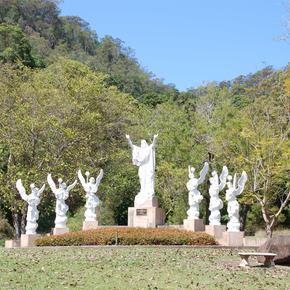 My touring companion, who is a local, was trying to find unusual things to do. We were driving along the Beechmont Road to Canungra when suddenly there was a sign. Now many of you will know how exciting a sign can be, particularly when you are feeling lost or uncertain as to which way to go. This ‘sign’ called out to us from the midst of a sub-tropical forest, in amongst a cluster of trees that tried to define, or perhaps hide, a bumpy driveway that is the entrance to the Pauline Monastery.

Once we were out of the car, we looked for guidance. We found a map – scribed on yet another helpful sign! It showed us that at the rear of the complex there is a walkway that leads to ten life-size sculptures of the Stations of the Cross. Also in the complex are many Shrines built to honour and worship Marian/Mary. Each one has been designed and constructed by a different cultural group within the local community, and highlights the many faces, names and expressions of Mary throughout the world. But we would get to those later.

Inner Sanctum and the Stations of the Cross

It seemed practical to first explore the front area of the sanctum and walk along one of the numerous pathways that were highlighted on the map. We chose one that led us along a tree-lined path towards a brick chapel. The atmosphere was serene and peaceful and the intermittent birdsong coming from the trees suggested it was a place filled with harmonious interactions with all of God’s creatures in the natural world.

After a brief interlude at the first and largest Shrine, we continued on the pathway and entered an open-sided main Church reminiscent of those built in the Pacific Islands and made famous in 1950s Hollywood movies. I was intrigued by its construction and felt compelled to explore inside, but was unsure how to proceed as it was being cleaned in preparation for the next Service, and the numerous people with polish cloths, hoovers and buckets made me feel uncertain. I wondered if perhaps I was stepping over some unseen line to enter at this time. So I waited and observed.

Soon after, I received a ‘sign’ of approval by a woman polishing the pews and I entered and walked along the aisle towards the pulpit. It was then that I had an ‘Oh My God’ moment. Hanging on the wall in front of me, at the back of the Chapel, was an image of a Black Madonna. She stared out at me and I was transported to other times and other countries and the numerous churches and temples that I have visited in Europe that are home to either a statue or painting of a Black Madonna. How, I wondered, did this painting get here? Where did it come from, and why is she in this particular Chapel?

Engaging with the Magic and Mystery of the Black Madonna 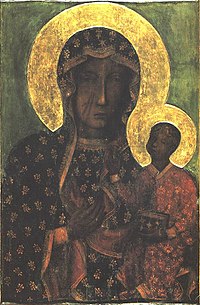 It transpires that the image in Canungra is a certified replica of ‘The Miraculous Icon of Our Lady of Czestochowa’- a Black Madonna original that has been in the care of the Pauline Monks in Poland, since the 1400s. The original ‘Lady of Czestochowa’ has a complex history, which helps define her as a ‘Black Madonna’ rather than just a black Madonna. Black Madonnas are not just defined by their colour – because it is often uncertain whether the colour of the Madonna shows the actual structure and skin pigmentation of the indigenous population of the area; or is instead a result of the artwork turning black due to deterioration of lead-based pigments, smoke or soot damage from the use of votive candles, or the accumulation of grime over the ages. Therefore to be an actual ‘Black Madonna’, a black statue or dark-skinned painting of the Madonna must also have some kind of magic or wonder connected to them, where people have experienced miracles in their presence.

While the full history of the ‘Lady of Czestochowa’ is not documented, the stories and legends about her origin and history are truly extraordinary and filled with miracles, wonder and majesty. According to legend the original was painted by St. Luke the Evangelist during the time of the Twelve Apostles, and he used a tabletop as his easel that was actually handcrafted by Jesus. Further, while he was painting the portrait, his subject, Mary, recounted the events in the life of Jesus that would eventually be used in his Gospel.

Constantine Makes a Shrine to the Black Madonna

No-one knows what happened next, and where the image was kept for a few hundred years, but when St. Helen – the mother of Constantine – went to Jerusalem in 326 AD to look for the real Cross, she apparently found the painting and gifted it to her son, who then built a Shrine and hung the painting in Constantinople. Some years later Constantinople was in a major battle with the Saracens, and it was feared Constantinople would be lost. Miraculously however, the Saracens were defeated and because the image of ‘Our Lady’ had been displayed on the walls of the City, many credited its survival to her.

Centuries later the portrait somehow fell into the care of Charlemagne, who then presented it to Prince Leo of Ruthenia (Hungary). Prince Leo hung it in his Palace. When his City was invaded sometime during the 11th Century, he prayed to the image of ‘Our Lady’, asking for assistance for his small army and legend says that ‘darkness overshadowed the enemy troops, and they attacked each other’.

In the 14th century, a Prince of Opola called Ladislaus, had a dream that prompted him to move the painting to Jasna Gora in Poland. Unfortunately however, when the Tartars invaded the Prince’s fortress at Belz in 1382, one of their arrows struck the painting and it lodged in the neck of the Madonna. The Prince fled overnight with the painting and stopped in the town of Czestochowa. ‘Our Lady’ was then placed inside a small church until the Prince later had a Pauline Monastery and Church built at the location to ensure the painting’s safety.

Seventy years later in 1430, the Pauline Monastery was over-run by the Hussites who wanted to steal the image. One of the marauders put the painting into a wagon to flee. When he tried to drive away, the horses refused to move. In anger he struck the painting twice with his sword (and these scars remain on the face of the Icon to this day). According to legend, as he raised his hand to strike it again, he suddenly fell over, writhing in pain, and died.

The Black Madonna Under Siege 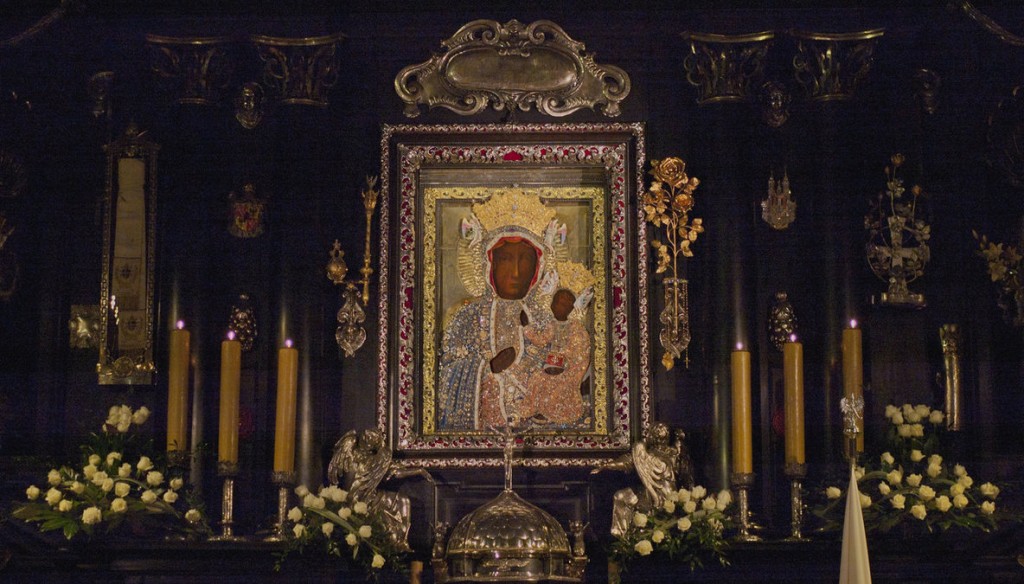 In 1655 Poland was invaded by the army of King Charles X of Sweden. The only unconquered part of the country was the area surrounding the Monastery. In yet another miraculous occurrence in connection with the image of ‘Our Lady ‘, the monks who lived there somehow defended the portrait throughout a 40 day siege until the invaders were expelled. To honour this miraculous event, King John II, Casimir Vasa, then crowned the image of Our Lady of Czestochowa as ‘Queen of Poland’, and placed the entire country under her care and protection.

The most recent wondrous event connected to the Painting, occurred during the Russian invasion of Poland in 1920. When, it is said, that as the Russian army was gathering on the banks of the Vistula River and threatening Warsaw, the army saw an image of ‘Our Lady’ in the clouds over the city, and it prompted them to withdraw.

Why Is A Black Madonna In Canungra?

All of this wondrous history connected to the original painting possibly explains why there have been numerous certified copies and reproductions made and placed around the world, although why a certified copy was gifted to the Marian Monastery in south-east Queensland is not something I could discover. It may have been gifted to help bring the community together; to help strengthen the faith of the congregation; and offer community members and parishioners a profound connection to the miraculous. I like to think that it was gifted to help bring the energy of Mary into the local environment and assist in raising our awareness of the Divine Feminine. But what do I know?

What I do know for sure is the unexpected pleasure that coming across such an Icon gave me, and the sense of magic and wonder that followed. Not just because she is a Black Madonna and how she is defined, but also because seeing and interacting with her fulfilled my criteria of a good day as a tourist – I learnt something new; the past and present meshed beautifully; and I discovered an inter-cultural relationship of the highest order. What a blessing!