Orbs, lights and other phenomena have been seen and recorded for thousands of years

With the advent of digital cameras and recording equipment, objects like orbs, lights, unknown or unidentified phenomena and other previously unseen energies and paranormal entities are now visible to the masses.

Recently she posted a few images on her facebook page saying – I just put this image of ‘Faeries in Flight with a Magenta ORB’ up on someone’s news feed and then I thought Why not share it here? So here it is! This is just one of many pictures that I have taken of strange phenomenon, lights, orbs, faeries and other beings. I think it would be great to start sharing images of phenomena such as faeries, angelic lights, orbs and other beings, to lift the frequency of our lives and support these beings in their work. So this is just one image that I will post. Maybe we could all share some of our pictures?

A few of the images Paulina has taken over many years with all sorts of cameras:

ORBS AND LIGHTS IN TREE

Orbs and lights in tree

Paulina was visiting Sydney, Australia and walking around the northern suburbs enjoying the trees and the city views. She was asked by a master to look up and take a photo of this tree. It was filled with faeries and their lights flickered into the photo.

Paulina loves old buildings and loves walking around exploring their angles, their history and the feel of their energies. She had a camera in her hand, as she walked along a narrow pathway between buildings. As she exited the narrow enclosure, she looked up and took a picture. There was an energy resident on the top of the building as you can see in this image.

FIRE BEING AT CEREMONIAL ALTAR

Fire Being at Altar

Paulina was leading a Four Direction Healing Ceremony, when she was prompted to take a photo of the Western altar. This fire being had danced into the Ritual to unite with the candle flame. In Celtic traditions fire beings are called Salamanders. In Cherokee traditions the direction of Fire is represented by the Thunderbird. Paulina honours both representations and they often enter a sacred circle. 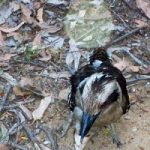 Paulina took this photo of a baby kookaburra at a Compassionate Friends Retreat that she was facilitating at. Golden orbs often indicate the energies of unconditional love. The fact that she took this photo at a retreat for families whose children who have died, gives it deeper meaning.

Paulina took this photo on one of her trips to New Zealand. She had spent the evening delivering a talk and meditation process that focused on Earth Energies and Sacred Sites. A few hours later, she was ‘called’ to go out in the night and take some photos. This is just one that she captured that night.