Author PAULINA HOWFIELD, Copyright 1996, Sedona Magazine.
This article cannot be reproduced in whole or any part without the permission of the author

In my efforts to contribute as best I can in the reconnecting of the etheric web in and around the planet, I travel to many different countries,to both experience the energies of various sacred sites and discover their effects on the changing face of human consciousness.

In 1994 I went to Australia to connect with the land and her many, ancient secrets. While there I was very, fortunate to share time with, and learn from, some of the aboriginal elders of Western Australia. One of those Aboriginal Elders, Ken Colbung, is currently in the UK to exhume the bones of one of his ancestors.

A Mission to get the Ancestral Bones 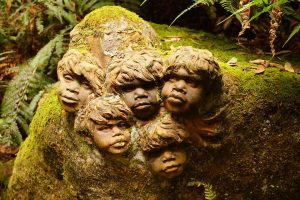 A mission that began over ten years ago, this is his second visit to England and he hopes this time to be able to take his ancestor’s bones home, to lay them to rest in their rightful place.

With so many changes occurring across the planet and within our consciousness, with a new and seemingly more enlightened political guardianship, and with a growing awareness of the plight of the Australian Aborigines at the hands of the British colonists, Ken stands a much better chance than ever before. Yet there is a rather large hiccup in the proceedings. Since his ancestor’s bones were buried, other people have been laid to rest on top of him. These ‘other’ people are twenty stillborn children. As a result Ken is now on a mission of permission.

Trying to contact all the relatives of the buried children to explain what he wishes to do and why is not easy. First, much time has passed since the children were buried and it is proving hard to find all the relatives. Secondly, not all the parents want the remains of their children to be disturbed.

A father of three stillborn children himself, Ken recognizes and understands these feelings and yet he also knows how important it is for his family, his people and the prophecies of humanity, for his ancestor to be laid to rest properly, within traditional ceremonial law in Australia.

Coinciding with his mission of permission, is a collaboration by the Australian and British Arts Councils entitled ‘newIMAGES, Britain and Australia into the 21st Century’ to show the extent and character of the ties between the British and Australian Governments. Part of the programme is a Theatre presentation called ‘The Seven Stages of Grieving’ written and performed by an Aboriginal woman from the northeast coast in the state of Queensland. A young woman in her twenties, she has taken on the task of storytelling for her people, to let us know the grief of life as an Aboriginal, both present and past. Told from the framework of her family, she shows what having your rights, heritage and language taken away can do to your personal dignity and most importantly your heart. 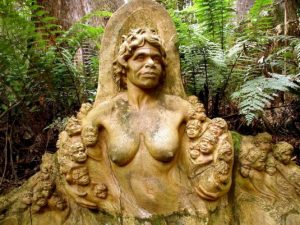 A moving yet amusing story, she leads the audience on a journey through her cultures seven stages of healing – grief, sorrow, loss, anger, hurt, surrender and reconciliation. Towards the end of her performance she asks the audience if it is possible for what her grandmother called ‘reckon, silly, nation’. Is it? Is it possible for us to reconciliate, and come together as different cultures? Or would she and her people have to keep grieving.

The very act that she was on the stage presenting such a moving series of stories makes me hopeful that there can be reconciliation – not only for reparation – which is vital, but also so that our collective can honour and respect what they have given us and held for us for many thousands of years.

I believe that Australia, her land, her people and her Lemurian secrets are an important part of the jigsaw in our changing world. Australian aborigines like all indigenous peoples have been caretaking the land and the secrets for centuries in preparation for this time. The time for reconciliation, deep healing, growth, change and awareness is upon us. We are alive at a time when we can bring different cultures together and honour the birthright of another, to share the wisdoms of who we truly are and why we are here without threat. I also believe it is time to live with gratitude for our indigenous cultures and ancestors who so thanklessly looked after all that we have now.