The Energy Lines that Connect Sedona and Glastonbury are Ancient

Now its possible that there will be another connection between Sedona and Glastonbury as the twin towns become bonded in another way.

(Article written and published in Sedona Magazine 1995 Copyright, Paulina Howfield Cannot be reproduced in any part without permission)

Three weeks ago I was traversing the west-country of England, exploring hill and dale in Cornwall, Somerset and Devon, and reconnecting with the energies currently being released from the land. I also absorbed the imprints of the summer crop circles and marvelled at the masses of birds as they took their part in helping to open the energy portals of the world.

As the car rounded the bend from the M5 my heart missed a beat as I once again glimpsed the wondrous Tor that towers above the beautiful rolling hills of Glastonbury. These beautiful rolling hills that were once shrouded in mists reached only by boat, were shimmering in the dew drops of the fall. I felt the rush of magic that comes with visiting Glastonbury and relaxed at the wheel as the car drove itself to the town car park that sits next to the Ancient Abbey where Arthur and Guinevere were buried.

Meanwhile, in the shopfront of Man, Myth and Magik, the red moon was weaving her spell as Marinna Sheldrake was unloading a shipment of sage sticks from Taos, New Mexico, As I approached the shop a higher energy. was palpable, The connection on the higher realms’ had been made. Once in the shop the conversation between Marinna and myself flowed.

The Connection is made between Sedona and Glastonbury

I had just returned from three months in Sedona, she and her partner Brian were just about to visit Sedona, I showed her a copy of The Sedona Magazine, and we talked about the connection between Sedona and Glastonbury as twin towns. I said I knew Maggie and Mary would be really interested in the idea, and maybe even all Sedona would be interested. when I got back to London,’ But as we know Glastonbury is not only connected to Sedona – and Sedona is not only connected to Glastonbury, for all places are part of the interconnecting threads of energy that run within, through and around all living There are villages in the west country that carry the threads of connections created in the more physical world of friends and allies of a World at war. 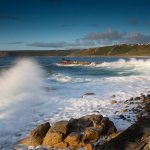 In the far west of Cornwall near Lands End – which marks the end of the St. Michael leyline that runs from one side of the English land mass to the other, and passes through the Tor of Glastonbury – lies a large tropical garden called Trebar. This garden, that resembles the lush jungles of warmer countries covers ten acres of sloping land that leads gently to the beach. It was this beach that housed the American Infantry in the days that led up to the D-Day invasion of Normandy. As I walked along the beach I allowed my mind to wander back in time, attuning to the memories contained within the sand and the pebbles and the jetties of the now famous landing site.

I felt fear, trepidation, nervous exhaustion and stamina. The energy of the men who spent their last few hours here were imprinted in the soil. Their memories and presence strangely present in the absence of their beingness. I was both honoured and saddened and sent a thought of thanks to each of them and the part that they played in the history of the world and the history of this place.

We were given a final visit by the “naughty spirits” as they had their traditional last night of cavorting as London celebrated Halloween. Meanwhile the mysterious magic continues to weave. London’s Thames barriers “almost” flooded but didn’t and we “almost” had a tube strike but didn’t, and whoever it is we need to thank for that mysterious input, I assure you all of us in London are extremely grateful.

And on that note, till next time, remember – magic only happens if you believe in it!