Welcome to the JulyAugust Newsletter 2011

This is the first Newsletter since I spent three months in the UK and Europe. Spring there was magnificent. The weather was brilliant, the Stone Circles and Earth Energies were inspirational, and it was a pleasure to engage with so many sites and places that are now active.

As I explained in the February Newsletter it was time for me to physically re-visit and tweak energy lines and vibrational centres that I had worked with a long time ago. Some of the sites I re-visited are now a part of the National Trust. Others have been taken under the wing of various councils and counties and so while the wilderness of some of the places has been transformed by walkways and county management, it is a joy to know that so many of us now want to engage with and learn from the beautiful Earth and Stone energies that were put in place eons ago by our cosmic ancestors.

I travelled to many places and traversed the length and breadth of the UK taking lots of photos, writing, doing readings and running workshops as I went from place to place. I also had the opportunity to catch up with many old friends and family which was an immense pleasure.

At the conferences, workshops and public speaking forums I met many interesting and like-minded people and would like to extend a personal welcome to all the new people receiving this newsletter and look forward to a long relationship with you.

For those of you who check out the Blog here on my website or regularly visit my Facebook page at ‘Matrix Harmonics Personal and Planetary Healing’ you will have already seen some of the pictures included in this Newsletter and read some of my daily activities – however some pictures and some energies you just can’t get enough of. So I wish you enjoyment as you see them again.

To arrange a 30 minutes or 60 minutes consultation contact me at phowfield@hotmail.com. Readings can be done in person, by phone or on skype. There is currently a three weeks waiting list for this service! 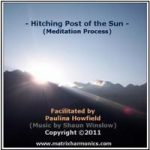 This meditation process was first delivered in New Zealand in 2010 during the shifts in the heavens caused by the Grand Cross Alignment and Summer Solstice. It was delivered again in the jungles of Peru and has evolved to now incorporate the magical energies of the ancient Sun temple of Macchu Picchu.

I am delighted to have Shaun Winslow’s music as a backing track. He has incorporated the vibrational essence of the energies of the Sun in this recording which beautifully facilitates my intention for everyone to fully experience and interact with its healing energies.

Speaking at the UK Probe Conference was a pleasure and I enjoyed re-connecting with people as well as hearing other interesting speakers. Charles Hall from the US shared his interactions with extra-terrestrials in Area 51 in the US in the 1960’s. Welsh medium Jane McCarthy showed hand drawn images of her abduction experiences that took place in her home in Cardiff. Vassily from Russia, showed people how to meditate and connect with other beings and elevated the group energy with a healing lantern ceremony. Miles Johnston showed videos and discussed some of the mind control projects in the UK and US. I spoke about the Cosmic Agenda for Earth Changes, discussing Crop Circles, Dragon Lines, Sun Temples and Energy Centres. While many humans attended we also had many orbs (caught on digital cameras) and an interesting being (caught as Speaker Sweeps Fox, swept his video camera across the audience).

One of the oldest neolithic sites in Europe, Newgrange is just one of many inter-connected mounds and tombs that our ancestors built thousands of years ago. Its complexity and ingenuity leaves visitors in no doubt of the talent and skills of our pre-decessors – whether human or cosmic. I was called to work and interact with its ancient energies and also connect it to its Lemurian and Atlantean beginnings.

The rainbow serpent presence at this site is very strong and the symbols drawn on the rocks and in the tomb itself have deep and profound meanings for indigenous cultures around the world.

I had three visits while I was there this time – one as a tourist and two as a grid engineer. What a blessing!

Geometry in the Crops

A few crop circles came early this year and while they didn’t last long as the crops weren’t quite ready to receive them it suggested that this year would be a great turn out for the circles and symbolic imprints that we all look forward too. In the last week of May I spent three days sleeping in the stone circles at Avebury soaking up their energies. Another blessing! It was also at the time when this circle (pictured left) arrived. 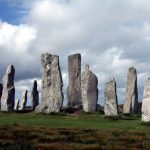 As I said earlier interacting with Stone Circles was a major part of my travels. So many of them are now releasing their knowledge across the leylines of the countryside and helping to elevate, cleanse and align the energy fields of the Earth. I still love to simply come across stones that show themselves to me – whether on this dimension or another – and be given the opportunity to interact with them and learn some of what they have to share. The stones in the picture (left) are not well known and they told me they show themselves only to those who are true, yet they and their devic presences provide an important role in filtering radiation that comes from the Earth, from the activities of man, and from the energy of the Sun. They tell me this image will change in the next year or so as they filter more of what we perceive to be toxins from their environment.  So I will keep you posted of any changes and any new information from them.

Many people think that dragons are simply a part of mythology and symbol however they are real and exist in the devic worlds and in the landscapes of Mother Earth.

There are three main types of dragons:

1. The Primary Dragon – encircles the planet and is under the stewardship of various ascended masters. It helps keep the energies of the Earth and every living being on her body healthy and harmonious;

2. The Secondary or Major Dragons – exist at certain places on the planet. There are a specific number of major dragons and they all have offspring or eggs. Each has an impact on the landscape and imbues its energies in a way that inter-relates with the mythic dragon stories in mythology;

3. The Dragon Eggs – were laid by the secondary dragons and put in particular places for sentient beings and human to interact with and potentise the landscape.

Working with Dragons and Dragon Lines is an important part of my work as a Grid Engineer, and it is something that I do in many places on this planet.

In New Zealand, Peru, Australia, USA and the UK I have been fortunate to interact and work with numerous Dragons to assist in the ‘awakening’ and aligning of the energies of the land and the collective unconscious of humanity.

Another important part of my work is to assist in the aligning and awakening of the Lemurian Consciousness both in the land and in the collective memory of humanity and the sites in Peru, Australia, Easter Island and the Asia-Pacific can teach us many things.

Many sites on these areas hold the memory of the times of Lemuria. Some of them are now nothing more than ruins. However when we spend time at these places we can learn many things by the way the cities and temple sites were laid out.

All of them vibrate at a much higher level of consciousness than our western left brain communities, and the way they used electricity, crystals and telepathy, and also managed the planet with conscious use of electro–magnetic fields, is inspirational and something that I hope we will soon be able to understand and replicate.

Working with the light involves infusing light, re-arranging energy and aliging the light in places. It includes interacting with other dimensions, other beings and other places in the invisible realms—that without clairvoyant vision we get an idea of their existence through their manifestation as colours, shadows and sensations. Light workers may interact with the body, the soul, the subtle bodies, animals, humans, plants, cosmos – and is not something that can necessarily be properly quantified within our current way of viewing the world. If you feel called to be a lightworker you will know it and it will be compelling.

Check out these online:

•Child remembers past life as a pilot during world War II…… (Child’s Nightmares and Memories Prove Reincarnation www.fox8.com It is being called the most documented case of reincarnation ever.)

•Journalists and TV Presenters in the US stumble over words and talk gobbledegook— what does it all mean do you think…
(Are U.S. government microwave mind-control tests causing TV presenters’ brains to melt down? http://www.dailymail.co.uk/news/article-1372538/Are-government-microwave-mind-control-tests-causing-TV-presenters-brains-melt-down.html)