Pyramid of the Moon, Mexico

As we move deeper into the energies of the Divine Feminine – here is a beautiful example of a Temple dedicated to the Great Goddess – The Pyramid of the Moon in Mexico. 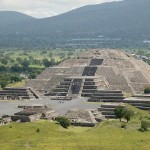 Pyramid of the Moon

This Pyramid is the second largest pyramid in Teotihuacan, Mexico. Some have called it Tenan, which in Nahuatl, means “mother or protective stone.” The Pyramid of the Moon covers a structure older than the larger Pyramid of the Sun. Its construction, between 200 and 450 AD, completed the bilateral symmetry of the temple complex. A slope in front of the staircase gives access to the Avenue of the Dead, a platform atop the pyramid was used to conduct ceremonies in honor of the Great Goddess of Teotihuacan, the goddess of water, fertility, the Earth, and even creation itself.

There is so much that these Pyramids can teach us. Not just in their construction, but also in the energies that they are imbued with. When our cosmic ancestors and the designers of our planet and our species created these temples and pyramids they were deliberately infused with imprints to facilitate our interactions with time so that we could create an inter-connected, harmonious relationship with them that would help both the planet and our species in our journey of spiritual transformation.