Egyptian Statue on the Move

A representative from the Manchester Museum says that Egyptian statue on the move is possibly a trapped spirit.

It seems that the Egyptian statue on the move has begun to revolve on its platform. While some researchers and Egyptologists are concerned that an angry spirit could be fighting to get out, I wonder if it isn’t just a sign that the energies of our planet and our consciousness are changing and we are now ready to learn more about the ancient teachings of Egypt. 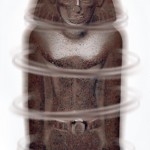 Apparently the 4,000 year-old statue slowly spins round in a perfect circle, despite being safely locked in a glass case. The 10ins black figure, on display to the public for 80 years, was an offering to the Egyptian God Osiris — regarded as the God of the DEAD. Great to see these Egyptian energies activating again…. http://www.thesun.co.uk/sol/homepage/news/4980146/I-sphinx-I-saw-it-moving.html#ixzz2X6V1zkTU