The Cochno Stone Markings in Scotland are examples of symbols and markings unique to the Bronze Age. 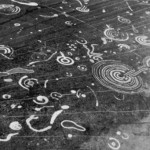 The Cochno Stone Markings show cup and ring marks. They are a form of prehistoric art and consist of a concave depression, that is no more than a few centimetres across. Cup and ring marks carved into a rock surface are often surrounded by concentric circles also etched into the stone. The decoration occurs as a petroglyph on natural boulders and outcrops, and on megaliths such as the slab cists, stone circles, and passage graves. They are found mainly in Northern England, Scotland, Ireland, Portugal, North West Spain, North West Italy, Central Greece, and Switzerland.  However, similar forms have also been found throughout the world including Mexico, Brazil, and India.

With dozens of grooved spirals, carved indentations, geometric shapes, and mysterious patterns of many kinds, the Cochno Stone, located in West Dunbartonshire, Scotland, is considered to have the finest example of Bronze Age cup and ring carvings in the whole of Europe.

This entry was posted in Blog and tagged bronze age carvings on rocks, cup and ring marks on stones, earth consciousness, earth energies, history in the rocks, megalithic art, mysterious patterns in rocks, petroglyphs in stone art. Bookmark the permalink.