Compelling evidence of the nature versus nurture quest in psychology:

In psychology studies there are lots of discussions about nature versus nurture, and its impact on the personal and psychological development and well being of each individual. Numerous twins have been studied – many who were separated at birth – to examine how alike and unalike they are: measuring things like body language and non verbal communication styles; skills and handedness; life management skills; and thinking processes. Most particularly these studies focus on how well individuals develop in different family environment and whether nature versus nurture is an important distinction. This article discusses the differences that show up in brain scans when one child is nurtured and the other is not.

What’s the difference between these two brains? 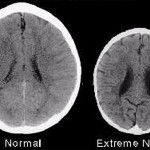 nature versus nurture in developing brains

Both of these brains belong to three year old children. The brain on the left belongs to a child who is loved and nurtured by its parents. The other belongs to a child that is neglected. This has dramatic implications for the debate in nature versus nurture and how we interact with and educate our children. It’s obvious that the brain on the left is much bigger than the one on the right. The image on the left also has fewer spots, and far fewer dark “fuzzy” areas.

To neurologists who study the brain, and interpret the images, the difference between these two brains is both remarkable and shocking. The brain on the right lacks some of the most fundamental areas present in the image on the left. Those deficits make it impossible for that child to develop capacities that the child on the left will have. It seems the child on the right will grow into an adult who is less intelligent, less able to empathise with others, more likely to become addicted to drugs and involved in violent crime. The child on the right is also much more likely to be unemployed; be dependent on welfare, and develop mental and other serious health problems. What could possibly cause so radical a divergence in brain development? http://www.telegraph.co.uk/news/health/children/9637682/Whats-the-difference-between-these-two-brains.html

This entry was posted in Blog and tagged body language, brain development in children, left handedness, life management skills, nature versus nurture, non-verbal communication, psychology and the brain, what is the difference between the left and right brain. Bookmark the permalink.