In the 1990’s as the ‘London Calling’ writer for Sedona Magazine, I wrote two articles discussing the attempts by elder Noongar leader Ken Colbung to get back the bones of his ancestors that had been transported after death and interred in burial sites in the UK. It was not an easy journey for him or his people as they repeatedly faced red tape from local governments in their quest to get back their ancestors. To read about his quest go to Search for a Hero.  In this recent Newspaper article the journalist talks to two Aboriginal Elders from the people of the waters region and asks about their sacred ritual for ancient remains that were exhumed at a building site in WA. 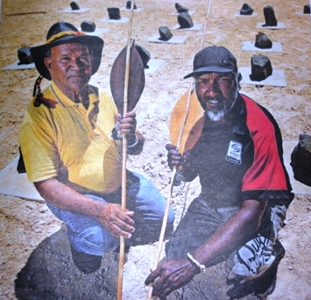 The descendants of the Wardandi, the Bunbury region’s ‘people of the water’ say their elders have finally come home. Noongar Elder Dennis Jetta said that from the 1960’s to about 2002, the remains of his ancestors had been exhumed in the name of progress on building sites around Bunbury.

They had been held in storage at the WA museum far from their country. For the past 25 years Mr Jetta and the Goomburrup Aboriginal Corporation have led a campaign to return the bones to country for burial. The remains have now been interred at what will become known as the Wardandi Memorial Cemetery.

Mr Jetta, who was part of a group of about 10 Elders who laid the ancient to rest said it had been a deeply spiritual and emotional experience. He said “There was one set of remains, he had stones form different areas with him and he had the red ochre with him. We looked at him in awe as we were putting him in the paperbark. We filled all the graves in by hand. Everything was done in the traditional manner”.