She hangs on a wall in the Black Madonna Chapel near Canungra. 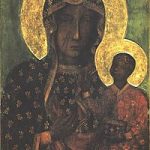 The real icon, which is in Czestochowa in Poland, is said to have been painted by St Luke on a panel that came from the table used by the Holy Family. There is a strong connection between the Pauline Fathers who are custodians of Marian Valley and the Madonna, since they have also been custodians of the original Black Madonna icon for centuries.

The term ‘Black Madonna’ refers to a painting or statue of Marian/Mary with dark or black features. Many have been found across Europe and date from medieval times. They are said by scholars to represent the true identity and meaning of Mary as Isis, because in Aramaic black means ‘sorrowful’–which links the Blessed Mother to Isis who was called ‘sorrowing’ in her search for Osiris.

Stephen Benko theorizes that “The Black Madonna is the ancient earth-goddess converted to Christianity.” His argument begins by noting that many goddesses were pictured as black, among them Artemis of Ephesus, Isis, Ceres, and others. Ceres, the Roman goddess of agricultural fertility, is particularly important. Her Greek equivalent, Demeter, derives from Ge-meter or Earth Mother. The best fertile soil is black in color and the blacker it is, the more suited it is for agriculture.